Risk-handling: Why athletes can be comparatively better entrepreneurs

The Handelsblatt once asked: Are athletes the better managers? The article by Michael Scheppe and Yasmin Osman sheds light on this question by presenting the career paths taken by former athletes and current managers Katja Kraus, Michael Ilgner, Thomas Lurz, Max Günthör and Oskar Deecke. We now want to go beyond that and ask the question: Are athletes the better entrepreneurs? In this context, we want to present the work and findings of Lukas Meissner and Finn von Appen. In their research, they have worked out what can be learned from sports entrepreneurs in terms of risk-handling. In the course of this, they interviewed active sports entrepreneurs who can draw on a successful career as a top athlete and are active entrepreneurs in different sectors.

Professional careers in sports have a limited time horizon and therefore, even top athletes are forced to actively engage in the search for a second career, whereby entrepreneurship represents a suitable option for athletes. Athletes like Marc Zwiebler, Martin Strobel, Tobias Duffner or Andreas Bechmann who we have already interviewed on this platform, are just a few more examples of athletes who have found their way into entrepreneurship.

Jan Jagla, managing partner @Patparius and CMO @Vibadou is another former professional athlete who obviously stands for the parallels between sports and entrepreneurship. After his sports career, he first gained experience in the corporate world before deciding to take the risk as an entrepreneur.

„I completely agree with the findings and conclusions of Lukas and Finn’s study. Today, as an entrepreneur, I recognize many aspects that I have already gone through in other ways in my life as an athlete. In terms of managing risk, my perspective is a very similar one as expressed through the study’s findings. Many athletes I know who are also now entrepreneurs have not only found a similar passion through their work as entrepreneurs, but also deal with the challenges ahead and the associated risks in a more focused and sober way than others who don’t have that background as a former athlete.“ 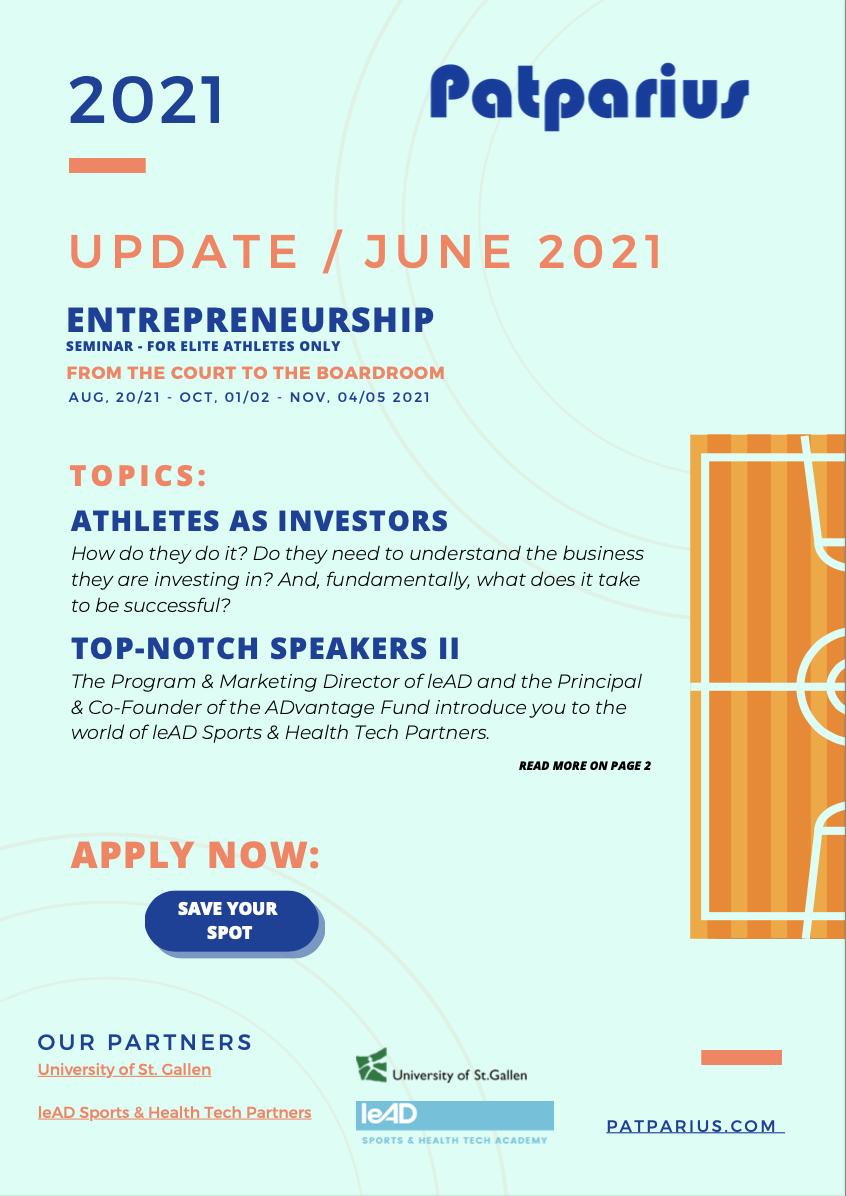 How do they do it? Do they need to understand the business they are investing in? And, fundamentally, what does it take to be successful?

The Program & Marketing Director of leAD and the Principal & Co-Founder of the ADvantage Fund will introduce you to the world of leAD Sports & Health Tech Partners.

>> Link Update on our Blog

The Players´ Impact (TPI) is an elite community of professional athletes and entertainers; joined by top investors, entrepreneurs, and thought leaders as they advance personally, professionally, and financially. TPI provides the framework for you to transcend the game.

In our seminar in cooperation with the University of St. Gallen and leAD Sports & Health Tech Partners, TPI will cover the investment side to give you practical insights into how they play the game, such as how they approach and validate pitch decks, what figures and ratios matter, how they evaluate them, and what they look for in their investment decisions: Opportunity or no opportunity.

From the hottest special purpose acquisition company (SPAC) on the market weeks before IPO, to a lesser-known startup, TPI get access because companies recognize the value of their investor community. In their sessions, they will show practical cases of how they approach these investment opportunities, how they form their judgment on whether or not to invest, what process they follow.

Since TPI was founded in 2017, they have established an ecosystem among their professional athlete network and business stakeholders. TPI is the leading, most diverse, dedicated community, known for uplifting athletes and entertainers with trusted resources and partnerships to succeed during and after their careers.

According to the research of Lukas and Finn and an earlier work by Ratten (2011), as one of the leading researchers in the field of sports entrepreneurship, there is a strong relationship between entrepreneurship and athletes as both rely on the use of the same skills (e.g. innovation or risk-taking). The studies show athletes are more suited to entrepreneurship than non-athletes because of their higher risk tolerance, which is particularly pronounced among athletes in high-risk sports (Steinbrink et al., 2020).

A current example is the athlete and entrepreneur Andreas Bechmann in his last decathlon in Ratingen where he had to weigh up very carefully in disciplines such as the long jump or discus throw whether he should continue to put strain on his ailing foot with an additional attempt in order to take advantage of the opportunity to improve his performance, or whether the risk of the strain was too great in view of the disciplines still to come. Here it was important for him as an athlete in competition under immense pressure to rationally weigh opportunity and risk and to make decisions with regard to the big goal. Experiencing and learning this way of thinking and acting in top-class sports helps him to successfully implement his risk-handling strategies as an entrepreneur at his venture Preventio.

In the context of the purpose of the study by Lukas and Finn to determine whether and to what extent a conceptual risk-handling framework can be developed by analyzing former professional athletes with respect to their risk-handling strategies in their sports career, they:

Based on the analyzed data, it became clear that a large proportion of the interviewed athletes demonstrate a pronounced, in some cases even a trained, mental strength. This allows them to act very conscientiously in uncertain and risky situations. Decisions are made very rationally. Furthermore, the analyzed data showed that the majority of the athletes tried to divide the main problem (i.e. risk) into several smaller problems in order to achieve the overall goal in small stages and in „best time“. This overarching goal was also an important driving factor in accepting risks and uncertainty in the first place.

It was clear to see that all former athletes exhibited a strong winning mentality. This means that reaching the defined main goal is achieved with a great deal of perseverance and also setbacks are anticipated and perceived as a chance to learn from. Rather, the interviewed athletes were clearly aware that there exist risks, but they were also able to deal with them. It is often the same risks (e.g. financial risk or risk of failure) that arise in both careers.

The conceptual framework developed on the basis of these insights has been illustrated and described in the study by Lukas and Finn – and will be presented at our Entrepreneurship for Athletes Seminar in Berlin. Thereby this conceptual framework describes what has been learned about risks and how to deal with them from the career as an athlete is applied almost unmodified to the risks during the entrepreneurial career. Furthermore, the study identified that prior experience as a top athlete influences the risk handling strategies as a sports entrepreneur to a large extent. Therefore, a clear and strong parallel to sports and entrepreneurship can be seen which on the one hand is beneficial for athletes who become entrepreneurs, but on the other hand can also be to the advantage of entrepreneurs in general if they follow and learn from the developed concept.

>> Parts of the text were taken from the work of Lukas Meissner and Finn von Appen with their consent.